LIVE
| The Forgotten City
See in

Empire: Total War is the latest installment in the Total War series, and takes place in the years between 1700 to 1799. It was developed by the Creative Assembly and released in March 2009.

The thundering sound of cannons echoes across the battlefield, smashing into a group of enemy soldiers sending them to whatever comes after this life. Meanwhile, my cavalry is preparing an attack on their flank, mopping up whatever resistance is left. At the same time my infantry engages the main force of the enemy firing one volley of bullets after the other at the enemy. This truly is total war.

Empire follows the basic principle of the former games in series, by having a campaign map (which is turn-based), where all the strategic decisions are made, and a battle map (which is in real-time) , where you fight the countless battles you will be plunged into. The major edtion to Empire is naval battles. They funtion quite well, though it takes some time to get used to them, and since I, so far, mainly have played with predominantly landbased nations, I haven't really gotten that much into it. The battles progress as in the former games, but since gunpoweder has made its entrance in Europe, the tactics have also changed. One observation I've made, is that there seems to be more emphasis on fewer, but larger armies. Another new thing is that each region has a capital and several small towns, instead of one large city. This is a nice addtion, and adds new possibilties to the game, in the sense that you can choose what that town should specialize in (Farmland, industry, university etc.).
Trade plays a large role in Empire, and the seabased nations should try to secure the socalled "Trade Theatres" as quickly as possible. The trade theatres are located in the East Indies, The Ivory Coast and Brazil and the more of them you control, the higher your trade income will be. They are, however, subjects of pirate raids and in the event of war with a rivaling empire, they might become under attack.

The game's graphics have been praised, which I really don't understand. Yes, the battlefields are huge and detailed look at the details of the soldiers, they're really just clones. I won't demand that every single one has to be unique, but looks kinda weird when 120 soldiers, who look exactly the same, stand side by side.
The sound of the weapons are very nice, and give an accurate feeling of being on the battlefield. The music is largely negateable, with the exception of some absolutly captivating music pieces.

My main problem with Empire lies with the AI. One of the most annoying things in the game is if you don't watch you're artillery, because in many cases they will simply shoot the soldiers in front of the cannon, enemy or not. It gets very annoying when you lose, even if just a couple, soldiers because of this idiootic thing. The cavalry isn't very useful either, and it's best to stick with infantry, even though they often get stuck at buildings and such.
The controls can be very iresponsive, and in intense moments, such as when you're infantry is being flanked by enemy cavalry, it gets annoying when have to pound at the "pause" button to pause.
Another annoyance is bogs (not bugs). Apparantly whenever your troops enter one of them they move around in extreme slowmotion, begging to be shot.

If you're interested in Empire: Total War, I'd advise to play the demo first. If you are new to the Total War series I'd recommend Medieval 2: Total War or alternatively the sublime Rome: Total War from 2004. However, if you can live with bugs that follow Empire, you can look forward to a game that does grand strategy to near perfection, and the campaign map is going to keep you playing

Thank you for your time. We will take care of this matter as soon as posible
nice anmeldelse 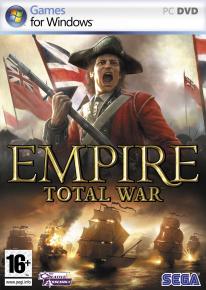 Short clip from my upcoming game. Archer gives Goblin a swimming lesson by melting the ice his standing on with a well-placed fire arrow.