The Elder Scrolls V: Skyrim is an action role-playing game, playable from either a first- or third-person perspective. The player may freely roam over the land of Skyrim, which is an open world environment consisting of wilderness expanses, dungeons, cities and towns. The player may navigate the game world faster by riding horses, or by utilizing a fast-travel system that allows them to warp to previously-discovered locations. The game's main quest can be completed or ignored at the player's preference after the first stage of the quest is finished. Non-player characters populate the world and can be interacted with in a number of ways; the player may engage them in conversation, or kill them. Crimes like murder and theft accrue the player bounty points in each of the world's nine districts. Should the player be stopped by a guard, they may wipe their bounty with gold or jail time, or may resist arrest which will trigger an aggressive pursuit. NPCs may allocate the player additional side-quests, and some side-quests have parameters adjusted based on nearby dungeons the player has yet to explore. Some NPCs that are befriended or hired by the player may act as companions who will accompany the player and provide aid in combat. The player may choose to join factions, which are organized groups of NPCs such as the Dark Brotherhood, a band of assassins. Each of the factions has an associated quest path to progress through. The cities and towns in the game world each have an economy, which the player can stimulate by completing jobs such as farming.

A perpetual objective for the player is to develop their character. At the beginning of the game, the player creates their character by selecting one of several races, including humans, elves and anthropomorphic creatures, and then customizes their character's appearance. Over the course of the game, the player improves their character's skills, which are numerical representations of their ability in certain areas. There are eighteen skills divided evenly between the three schools of combat, magic and stealth. When the player has trained skills enough to meet the required experience, their character levels up. Each time their character levels, the player may choose to select a skill-specific ability called a perk, or store perk points for later use. Unlike earlier entries in The Elder Scrolls series which used a character class system to determine which skills would contribute to the character's leveling, Skyrim allows the player to discover preferred skills as they play the game and rewards the player with more experience when a frequently-used skill is leveled. A head-up display (HUD) appears when any of the player's three main attributes are being depleted. Attributes regenerate over time, although this process can be accelerated by taking potions or regenerative spells. Health is depleted primarily when the player takes damage, and the loss of all health results in death. Magicka is depleted by the use of spells and by being struck by lightning-based attacks. Stamina determines the player's effectiveness in combat and is depleted by sprinting, power attacking, and being struck by frost-based attacks. The player's inventory can be accessed from the menu and items can be viewed in 3D, which may prove essential in solving puzzles found in dungeons.

The player's effectiveness in combat relies on the use of weapons and armor, which may be bought or created at forges, and magic, which may be bought or unlocked by finding spell tomes. Weapons and magic are assigned to each hand, allowing for dual-wielding, and can be swapped out through a quick-access menu of favorite items. Shields can be used to fend off enemy attacks and reduce incurred damage, or offensively through bashing attacks. Blunt, bladed and hacking weapons can be used in close combat and each have specific advantages and roles; for example, the player can perform power attacks with each weapon. Magic can be used in the form of spells, which have many different function, such as the regeneration of health or the depletion of enemy health. A bow and arrow may be utilized in long-range combat, but the bow can be used as a defensive melee weapon in close combat. The player can enter sneak mode and pickpocket, or deliver sneak attacks to unsuspecting enemies.

When exploring the game world, the player may encounter wildlife. Many creatures in the wilderness are immediately hostile towards the player. Skyrim is the first entry in The Elder Scrolls to include Dragons in the game's wilderness. Like other creatures, Dragons are generated randomly in the world and will engage in combat with NPCs, creatures and the player. Some Dragons may attack cities and towns when in their proximity. The player character can absorb the souls of Dragons in order to use powerful spells called "Dragon Shouts". Each Shout contains three words, and the strength of the Shout will vary depending on how many words have been spoken. The words to Shouts can be learned by visiting "Word Walls" in dungeons. The words to each shout are unlocked for use by spending the absorbed souls of slain Dragons. A regeneration period limits the player's use of Shouts in gameplay. 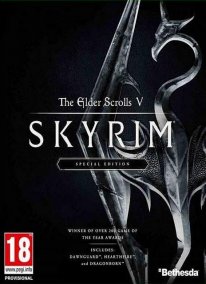