"The Empire Soldier, at least the version you were playing now is really focused on up close and taking care of groups of enemies," explains Magnuson. "And the Waywatcher is really specialised in being fast and going in and stabbing the enemies and also really good at taking out enemies from afar with bow and arrow."

"Waywatchers are charged with guarding the secret paths of Athel Loren, the ancient home of the Wood Elves. This was Kerillian's vocation, a duty she performed for hundreds of years, slaying trespassing Beastmen as well as curious Bretonnian peasant boys foolish enough to enter the woods in search of the Fey.

Even for a Wood Elf, Kerillian's sight was sharp, able to pick off a ladybird eating a leaf at a hundred paces if she chose to. But this gift, coupled with a natural curiosity also turned against her when she one night saw something that no mortal was ever meant to see." 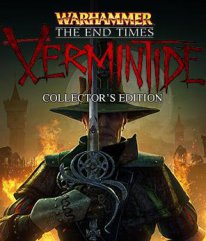