"It's a racing game, but you play as a team and the aim is to always win as a team," udtaler Derek Littlewood. "It's about coordinating and collaborating with your teammates on the track to ensure that all of you win together rather than just constantly playing for yourself."

"To be able to race as a team and win as a team, that's really something we haven't seen in the marketplace up until now," siger Takashi Iizuka. "This is one of the features we think is really unique for the game, and we want people to really embrace that team mechanic, go out there with some friends, team up and then go out either in an online setting and race with other people online, or even just do local multiplayer and have fun as a team sitting on the couch together."

"Sega and Sumo have actually worked together quite a lot in the past," udtaler Iizuka. </em>"We've made tennis games together. So when we started working with Sumo again we really knew that they could deliver great games, especially when it came to the racing elements, we knew we could believe in all the team members to deliver something really amazing."</em>

"For a game called Team Sonic Racing, the racing part is something that Sumo had down, it was sorted. I think Sega has helped us to understand how to make the game the best Sonic experience it could be, and I think between the two companies we figured out the team aspect of it." 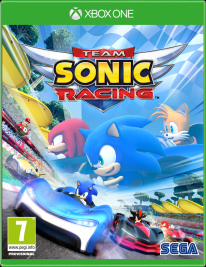